Hello again my dearest readers. I would like to apologize again for my long absence – I am currently on my Fall Break and have not had much time for internet. For my break, I have planned a trip with one of my best friends from back home who is also studying abroad in Europe (she’s in Budapest) and we are traveling to Berlin, Budapest and Prague together. I arrived in Berlin on Friday and so far, I am in LOVE with this city! It is so modern yet so historical and important and it feels pretty crazy to stand here and think about all the things that have happened here in the past. I am also going to be here for the 20th anniversary of the falling of the Berlin wall, which will be an amazing day to remember. There have been festivities around the city this whole weekend as people prepare for the big day tomorrow. I feel so lucky to be here right now. =)

Today I went to the Salvador Dali museum here in Berlin, which was amazing, as I expected. It was mostly illustrations, lithographs, and small works, many of them with a major theme or that told a story: there was a series of illustrations that depicted the story of Don Quixote de la Mancha (for example, Don Quixote’s battle with the windmills) or of Alice and Wonderland (interpretations by Dali of the rabbit hole and the mad tea party – as if Alice in Wonderland wasn’t crazy/awesome enough) or of stories in Greek Mythology (such as the Birth of Venus). His interpretations were pretty spectacular; some were very abstract, some very literal, and some… well, I don’t even know, but they all managed to capture the essence of each story he was trying to tell, which I believe is a feat only a great artist can achieve. I was impressed, and inspired after leaving, and I even said out loud as I was leaving the museum (to myself), “Dali, you are absolutely amazing.”

Also, there was a film playing that I saw in my History of Modern Design class (a class which I have referenced many times on this blog because of its influence on my LIFE) called “Un Chien Andalou” – I recognized it because I heard a familiar Richard Wagner song combined with a Tango-esque tune across the hall and I knew it had to be that film. It is a strange surrealist film with no real plot, and no linear time sequence – its pretty strange, but humorous (to me, at least) and definitely worth watching at least once. I will include the film at the bottom of this post, if you’re interested.

In conclusion, Dali is a god, and I will forever praise him. This museum was spectacular and all of his work was mind-boggling and inspiring in many ways. What a genius. 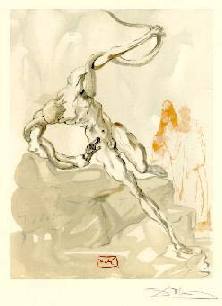 Unfortunately, I was not allowed a camera inside the museum, so here are the sites where I found pictures of the work that I saw today in Berlin: